for Disc Harrows Manufactured by BDT-AGRO 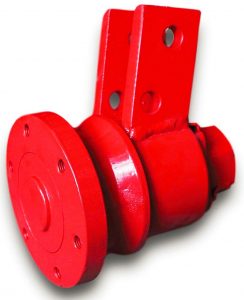 The new-generation maintenance-free bearing assembly manufactured by BDT-AGRO is to replace the classical bearing assembly which is widespread but morally obsolete and is currently used in BDM disc harrows and their numerous equivalents.

According to the results of BDT-AGRO LLC’s participation in the Golden Autumn exhibition held in Moscow at VDNKh (All Russian Exhibition of People’s Economy), the assembly developed and manufactured at our plant has been awarded with a silver medal in the competition “For the Production of Highly Efficient Agricultural Machinery and Implementation of Advanced Resource-saving Technologies”. The award ceremony took place at the exhibition stand of the Ministry of Agriculture.

Patented design solutions used in the maintenance-free bearing assembly ensure high performance and operating reliability with no need for adjustment ( the assembly nut tightening must be checked after break-in, similarly to a car) and lubricating the assembly (the bearing is filled with a lubricant during assembly and requires no additional lubrication). The maintenance-free assembly is designed according to the automotive hub principle, i.e. the assembly flange with a disk rotates, the axle in the assembly housing is fixed, the axle nut is located outside the housing. Therefore, there is no need to take off the cover and rummage in the lubricant for tightening the nut, which is necessary in the classical bearing assembly.

A reliable 6U-5 maintenance-free closed double-row tapered roller bearing from the front wheel hub of the Sobol van is used in the housing of the maintenance-free bearing assembly. It has an original labyrinth seal for dust protection, which has allowed extending the service life of the cutting assembly. There is no need to constantly syringe and endlessly adjust the bearings. 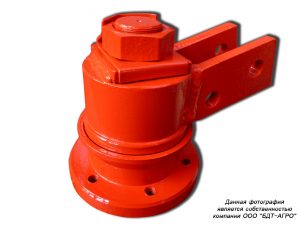 The adjustment of tapered bearings on the wheels has long ago become unnecessary on cars and even on small trucks. This is caused by the appearance of maintenance-free closed double-row tapered roller bearings. Without giving it much thought, many companies began installing a maintenance-free bearing into the classical design of the bearing assembly. However, this only solves half the problem. New wine should not be poured in old wineskins.

The problem of the mushroomed axle still remains. The abrasion of thin-walled housing still remains. Naturally, the closed double-row tapered roller bearing needs no maintenance. But if the inner racers are not fully tightened or if during operation local crumpling of mating surfaces occurs, the racers will move apart, excessive gaps will appear and the double-row bearing will disintegrate like a common bearings in the classical assembly. So, if a maintenance-free bearing is installed into the classical design of a bearing assembly, the same problems as with common bearings arise: constant re-torque adjustment, abrasion of the housing, etc.

BDT-AGRO has taken a different approach. We have abandoned the forged mushroomed axle and the bearing housing has been made to rotate. The new-generation maintenance-free bearing assembly (Fig. 2) manufactured by BDT-AGRO contains bushing 1 with welded jaws 2 for fastening to arm 3 with two bolts 4. Axle 5 is fixed in the bushing. Double-row roller bearing 6 with pre-adjusted axial internal clearance, closed and filled with lubricant, is located between the axle collar and the bushing. This bearing requires no maintenance during its entire service life. Cutting disc 9 is fastened to bearing housing 7 by means of bolts 8. Cover 10 is installed between the cutting disc and the bearing. The bearing housing and bushing form a labyrinth seal 11 between them. In addition, a cassette seal is used for protecting the bearing against dirt. Axle 5 has a threaded part with a flat surface and is fixed by means of nut 13 and lock washer 14.

To provide interchangeability of the new assembly with the classical, its dimensions have been slightly increased. However, housing 7 itself is now rotating and bushing 1 is covered with the arm. There is simply no room for soil to accumulate.

The thickness of bushing 1 of the maintenance-free assembly at the point of contact with soil is 30 mm and requires no additional protection, and bearing housing 7 rotates, thus, its abrasion considerably reduces, and abrasion occurs uniformly over the whole housing surface. It guarantees a long service life of the assembly.

There is no need to take off the cover and rummage in the lubricant for retightening, which is necessary in the classical bearing assembly. And, most importantly, all surfaces in contact with the bearing undergo quenching. It reduces local metal crumpling and, accordingly, the necessity of retightening ten times.

For protection against dust and dirt, there is an original labyrinth seal 11 and cassette seal 12, which are on par with the best ones in the world.

The new bearing assembly is completely interchangeable with the classical assembly and can be installed both on straight arms manufactured by BDT-AGRO and on curved arms used in tools of other manufacturers. Maintenance-free assemblies for other disc harrows and mulchers with fasteners different from BDM are available on demand. 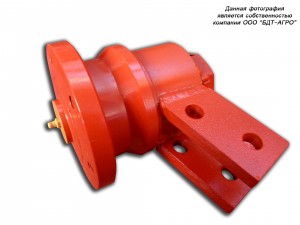 The bearing protection against dirt pressure is passive. It is clear that you cannot fight a war with just a shield. You will need a sword for a counter strike. In the classical bearing assembly, it is possible to continue operation even when the lip seal breaks down completely. It is enough to lubricate the assembly regularly so that the lubricant would continuously squeeze out dirt.

For those who are prepared to maintain the assembly and regularly lubricate it, a new bearing assembly is offered.

The maintainable new-generation bearing assembly (Fig. 3) manufactured by BDT-AGRO contains bushing 1 with welded jaws 2 for fastening to arm 3 with two bolts 4. Axle 5 is fixed in the bushing. Two roller tapered bearings 6 are located between the axle collar and the bushing. Cutting disc 9 is fastened to the bearing housing 7 by means of bolts 8. Cover 10 with an oil can/greaser for lubrication of the bearing is installed between the cutting disc and the bearing. The bearing housing and bushing form a labyrinth seal 11 between them. In addition, lip seal 12 is used for protecting the bearing against dirt. Axle 5 has a threaded part with a flat surface and is fixed by means of nut 13 and lock washer 14.

The new bearing assembly has all the above-mentioned advantages of the maintenance-free assembly. The new assembly however uses regular roller bearings and a regular rubber lip seal. Both elements are much cheaper and with timely maintenance they will function even better than in the maintenance-free assembly. It is necessary to add that the oil can/greaser is located on the convex side of the disc, is easily accessible and is always clean. The adjustment of bearings is noticeably simplified compared to the classical assembly.