KShU series cultivators are designed for preseeding in all types of soils which have undergone cultivation or ploughing, with the process including covering of furrows. The KShU cultivator supports high-quality, single-pass performance for operations such as killing weeds, soil scarification (up to 12 cm), smoothing, mulching, and pressing (adjustable topsoil compaction) including the creation of a compacted bed for seeds in the seed layer, and provides resource-efficient integrated tillage.

The KShU series cultivator is used in various agricultural climate zones and for all types of soils, including those vulnerable to wind and water erosion, except for stony ones;

– In the basic minimum-till cultivation system: for preseeding cultivation, as well as for smoothing field microrelief.

In series production, KShU cultivators are equipped with a single helical wheel. A dual tandem wheel (helical, slatted, or rod-type), a leveling slat, and a 4-row spring harrow can be installed as an option.

The slatted and helical slatted press wheels manufactured by BDT-AGRO are designed so that the slat penetrates the soil nearly vertically and leaves the soil nearly horizontally. As a result, the wheels provide good excavation, ridge cutting, and field surface smoothing after the tool makes a pass.

When operating in loose soil (for example, preparing ploughed land), if the wheels break through and become packed with dirt, they should be turned 180°. In this case, the slats will lay flat on the ground and leave the ground vertically. This increases the load-bearing area of the wheel and the wheel itself will grab less soil and, therefore, be less prone to clogging.

1. The load-bearing beams supporting the operating elements (gang arms) of KShU series cultivators are made of 60×60 mm square tube. In this case, the tube passes all the way through several access holes in the frame (see the picture of the frame); this approach has led to a significant improvement in tool reliability.

2. More balanced spacing of the S-shaped gang arms in a row has made it possible to eliminate cultivator “clogging” with weeds and crop residues and prepare a higher quality seed bed.

3. KShU cultivators are fitted with an S-shaped tine with a cross-section of 45х12 mm (with a helper spring) or 62х12 mm (without a helper spring). The point overlap is 20 mm on each side. The use of a rod-type press wheel instead of wire rollers or spring harrows improves soil leveling and allows operating on a heavily weed-choked field. The use of an improved bearing assembly and increase of the press wheel axle diameter up to 30 mm significantly enhances the wheel reliability.

4. Unlike the cultivators of other manufacturers, the wheels on BDT-AGRO LLC’s KShU series cultivators are pivotly fixed “in tandem,” rather than rigidly attached; thereby enabling the load to be distributed evenly between the two wheels.

6. All intermediate metal tubes have been removed from the hydraulic system and the number of connections and hydraulic cylinders has been reduced.

7. The width and height of the cultivators in transport position enables it to be transported on public roads without additional permit documents. 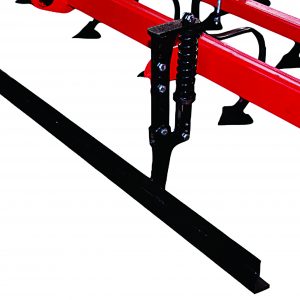 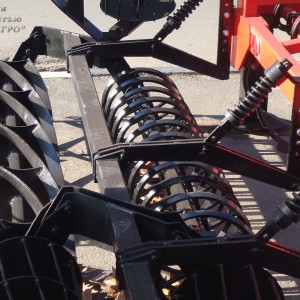