In order to improve the quality of operation and reliability of disk harrows, BDT-AGRO Company has developed and launched a new line of modular disk harrows BDM-M.

The modular harrow consists of a carrier module, disk module, and press wheels. The carrier module is comprised by a trailer, longitudinal frame, and chassis, while the disk module consists of a transverse frame with the disks on individual tines; the attack angle of the disks in each row can be simultaneously varied. The disk module is attached to the bottom of the carrier module using flanges that form a single base surface. The press wheels are installed in a single line immediately after the disks and ahead of the chassis. As an option, support wheels for precise adjustment of the tillage depth may be installed ahead of the tool.

• 4-row harrows have a relatively small distance between the rows, that is 675 mm. As harrows are transported as metal frame structures, the row-to-row distance is limited by shipping concerns. As a result, the soil lifted by the front disk rows prevents the rear disks from operating efficiently. To avoid jamming, the user either has to slow down or decrease the operating depth. 3-row harrows have a smaller disk-to-disk distance in a row, 350 mm, while the row-to-row distance is much longer, that is 1050 mm. Each disk coverage and overlap are similar for 3- and 4-row harrows. So both 4- and 3-row harrows can operate on very weedy fields and at greater depths. 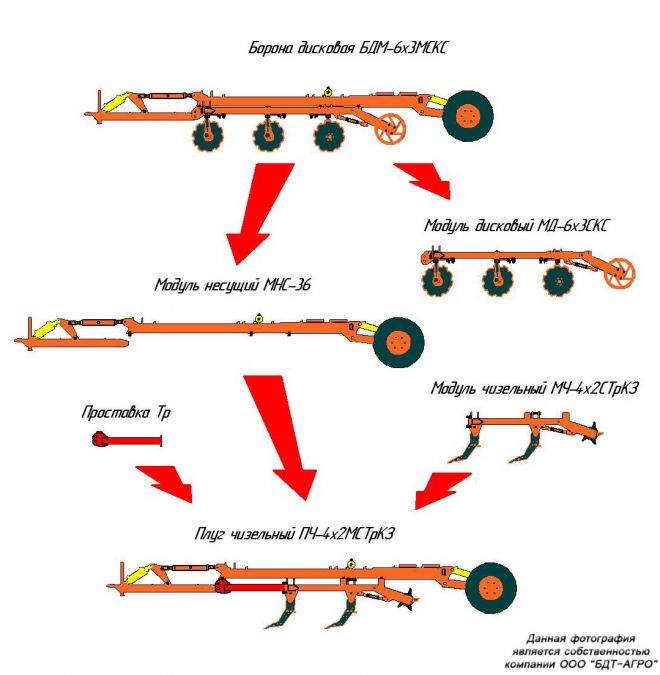 1. Originally, 3-row harrows with separate holders for each vertically tilted disk had a disk-to-disk distance of 300 mm within a row. Then this distance was simply divided by the number of rows. So the offset for each holder with respect to the frame came up to just 100 mm. It should be noted that each disk is vertically tilted and its lowermost point almost never matches the holder pivot axis. This resulted in an irregular disk pattern. Many 3-row harrow manufacturers still use such an arrangement. Based on the studies performed, BDT-AGRO has developed and tested a new, improved disk layout. The 3-row harrow disk-to-disk distance is 350 mm. For this reason, lower tractor power is required, and up to 12 % of fuel is saved compared to the same-width tools from other manufacturers, while preserving the soil processing quality.

2. All disk tools face a problem: each row of disks tries to pull the harrow in the direction of the disk rotation. The tool turns about the tractor hitch point. To balance the harrow, its first row is made symmetrical: half of the disks face one side and the other half face the other side. Nevertheless, for a 300 mm row-to-row distance it is impossible to exceed a 15° angle of attack for two adjacent disks facing opposite directions. Since the angle of attack is adjusted for the entire row at once, the first row angle would always be below 15° regardless of the adjustment mechanism operation. There are two solutions: either to cheat the customer by falsely declaring that the tool has an adjustable angle of attack, or to install one disk outside the row, making the tool and the adjustment procedure more complex. The 3-row harrows from BDT-AGRO have a disk-to-disk distance of 350 mm. It is quite sufficient to avoid any adjustment issues for the first row angle of attack.

3. The tools from BDT-AGRO have disk holders with a grease channel and groove. Lubrication is required just once a season. That is why the harrows have only one grease fitting. In an emergency, you can unscrew the holder mounting bolt, put some grease inside and push it all the way down to the joint while screwing in the bolt. The design significantly improves the joint performance and makes it easier to remove the holder.

4. The new generation bearing assemblies from BDT-AGRO are easier to maintain and much more reliable than the “conventional” design.

6. A common disadvantage of all disk harrows is that the outermost disk in the last row leaves an open, deep furrow. The outmost last row disk holder on the tools from BDT- AGRO is 40 mm shorter than other holders. As a result, the outmost last row disk is positioned 40 mm higher than the other disks. This makes a shallow furrow but still undercuts, grinds and throws enough soil to cover the furrows left by the front row and other rear row disks. The press wheel finishes leveling the field. The patented design of LLC BDT-AGRO tools improves land treatment quality.

7. LLC BDT-AGRO provides a 12-months warranty for the frame, the straight holder, the chassis and the drawbar (the warranty does not cover the bearings and wear parts). 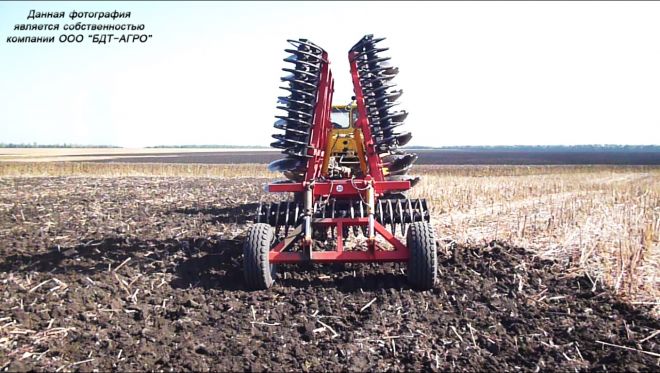 • In the BDM-M modular harrow with a maximum operating width of 6 m, the folding tools have a transport width of 2.55 m. This enables them to be operated on public roads without an escort.

The slatted and helical slatted wheels manufactured by BDT-AGRO are designed so that a bar enters into the soil in a near-vertical orientation, and leaves the soil nearly horizontally. As a result, it digs, cuts ridges and levels the field surface properly after the tool passage.

When treating loose soil, for instance in tillage operations, when the wheels fall through and are clogged with the soil, the wheels shall be turned 180°. In this case, the bar will be laid down on the soil horizontally, and moved out of the soil vertically, thereby increasing the wheel support surface; the wheel will grab less soil, and its clogging will be reduced. 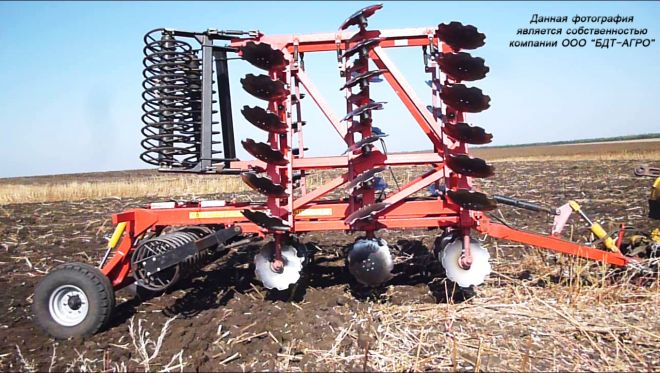